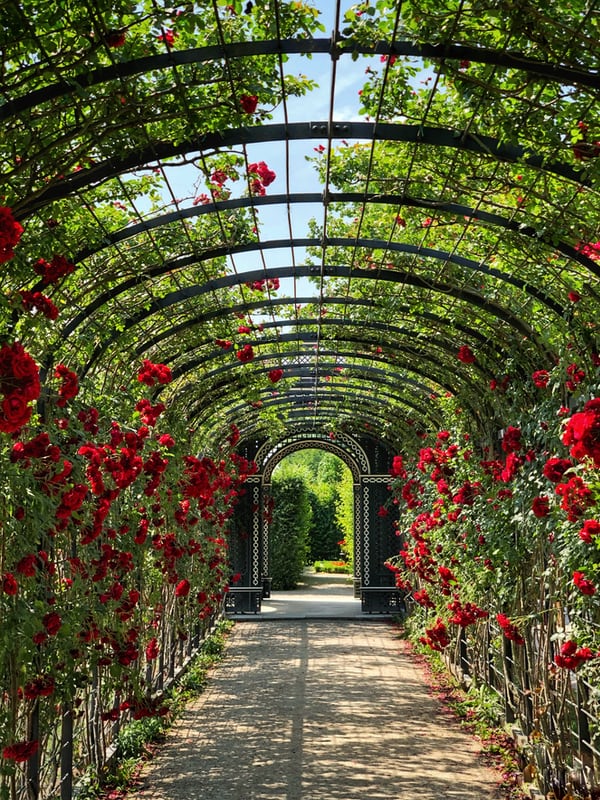 Impact of nature and community growing projects on mental health in displaced communities.

The world is currently experiencing large mass migrations, with roughly 1% of the earth’s population displaced, 40% of whom are children and many of them with experiences of severe trauma. Helping these young people develop a connection with the land could aid them in feeling more grounded and in developing a sense of belonging, rooted in a reciprocal relationship with the earth. Using the experiences I had working alongside people and the land in and around Moira refugee camp, Lesbos, as a case study, we explore the possible mechanisms of action and the importance of these connections.

I began working for a small permaculture farm, Sporos, that hosted locals, asylum seekers and refugees. The aim of Sporos is to bring communities together in a place where knowledge of the land, food and friendship can be shared. Sporos was teamed with a permaculture garden (the EcoHub) in the community centre for refugees and asylum seekers – that garden was run by a group of NGO workers and people from the camp. As things began to reach boiling point on the island, with growing political tension, increasing numbers of arrivals to an already overcrowded camp and corona on the horizon, these places felt like sanctuaries, they offered an escape for all.

We spent hours turning compost, sifting seeds, digging beds, harvesting vegetables and finding connections over common ground. It gave the young adults a chance blow off some steam but it also gave them purpose, something that could often feel lacking when living with such huge uncertainty for so long. They also enjoyed sharing with us how they had used to do things ‘back home’ and for many of them, being with nature or growing food connected them with their past and provided a vehicle to discuss parts of their previous lives – parts that may have otherwise become tougher to access. Everyone I met had their own difficult story, but the garden didn’t offer a place of pity, it offered a place of power.

A story that captures the hope these places helped cultivate is Wali and his families’. Wali’s daughter suffered with severe PTSD after their experiences in and journey from Afghanistan. Being in the garden provided her a place to be a child again, to experience life with all her senses, to access feelings of safety and playfulness. After being moved to a new camp in Athens, Wali began growing another garden, teaching his children about the growing he had done back in Afghanistan and connecting them to the world they found themselves in. When I went to visit them in Athens his daughter was a cheeky, smiling, giggling girl and it was such a pleasure to see.

Unfortunately, amongst the high levels of political instability the community centre was burnt down and the farm forced to close due to threats of arson and these places of refuge became memories. After this, I began working in the wound care section of the health clinic where extreme self-harm was a daily presentation, particularly evident in the younger populations in the camp and often symptoms of anger, hopelessness, fear and frustration, exacerbated by the cramped conditions and the lack of access to resources.

It was clear that these young people required support but with so few resources and scarce funding this inevitably proved very difficult. My experiences suggest that providing access to green space and nature-based therapies may be an important part of this work, offering a low cost and low carbon intervention.

Whilst further research is required to assess the viability and impact of therapeutic access to nature and growing for displaced communities, current initiatives for young people working alongside nature should be supported, both in displaced communities such as refugee camps but also in the countries that become their new homes.

As the climate and ecological crisis rages, the numbers of displaced people will continue to grow. As well as encouraging immediate political action aspiring to decrease the amount of people having to experience this, we need urgent support for the communities already experiencing it and some of the most vulnerable among them – children and adolescents. 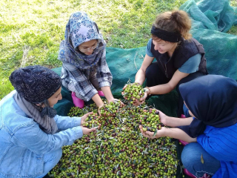 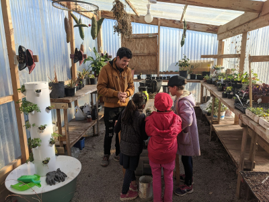 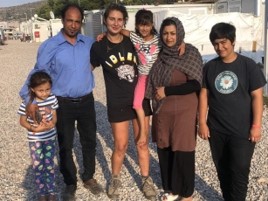 Wali and his family. His daughter in the middle. 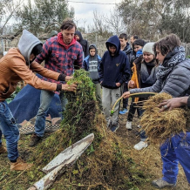 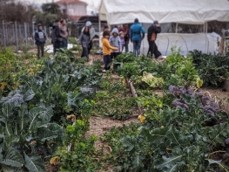