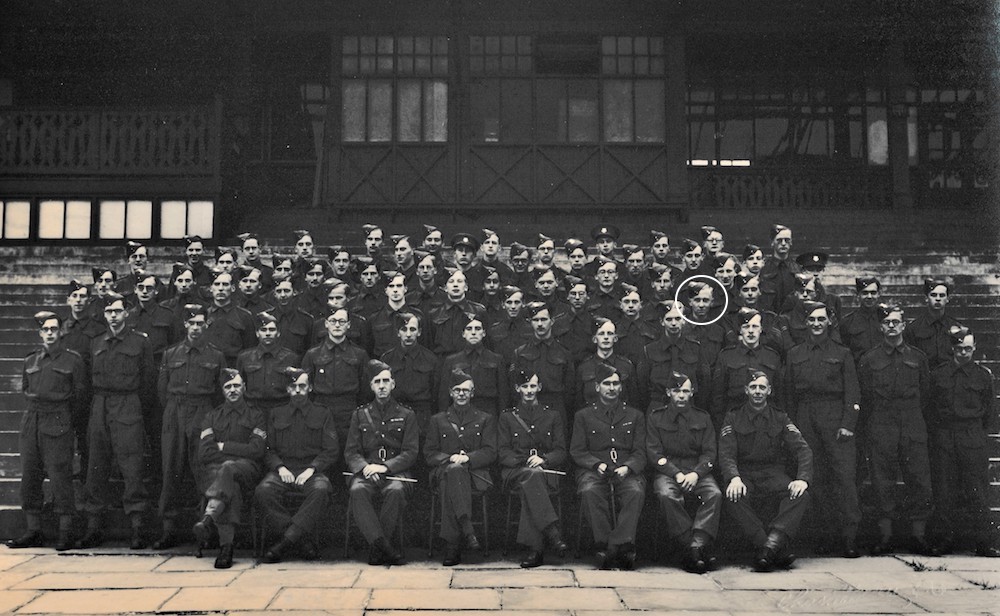 A Sheffield Medical Student in Wartime

It started with the first lockdown. I had just retired and had an urge to look at what was in the old boxes which every family tended to accumulate in the 1940s and which had been passed down to me and my sister. We hadn’t opened them since our parents filled them.

The first box contained 13 blue-bound editions of The North Wing; The Magazine of the Sheffield Medical School with nearly all the editions from Winter 1939 to Spring 1944, with only Summer 1940 missing. I offered these to the current Editor and one thing led to another and it occurred to us that the story of the students of those turbulent times could be of interest. The old editions had nothing much beyond some hints to reflect what was happening in the greater world of Sheffield and beyond. They did include some mentions of wartime students passing various exams, two of whom I knew very well; my Father, John Laws, up at Sheffield from 1939 to 1944 and my Mother, Pamela King known as Pam, up from 1938 to 1945.

John was born to Robert Laws, an accountant, and Lucy Laws in Luton in 1921. Alan, John’s elder brother, assumed the position of head of the family when Robert died in 1932 and studied accountancy whilst John was continuing his schooling, winning a scholarship to The Leys, Cambridge in 1935. The family moved to Sheffield, where Lucy Laws had many relations and felt very much at home.

It was clear that John was very bright and he was also good at games, becoming a truly excellent shot. He wrestled with career options between Banking and Medicine. By the summer of 1939 Medicine won. It was becoming inevitable that there would be a major European war. Alan was called up to serve in the Navy and John chose Sheffield Medical school so he could look after his mother, who was glad of his support.

The correspondence between the brothers, Alan & John, is candid and full of abbreviations, useful advice for each other, as well as giving news. In the first mention of starting his course on 10th of September 1939, John writes:

By January 8th 1940, lab work had started in earnest - dissecting dogfish which use their ears to balance. 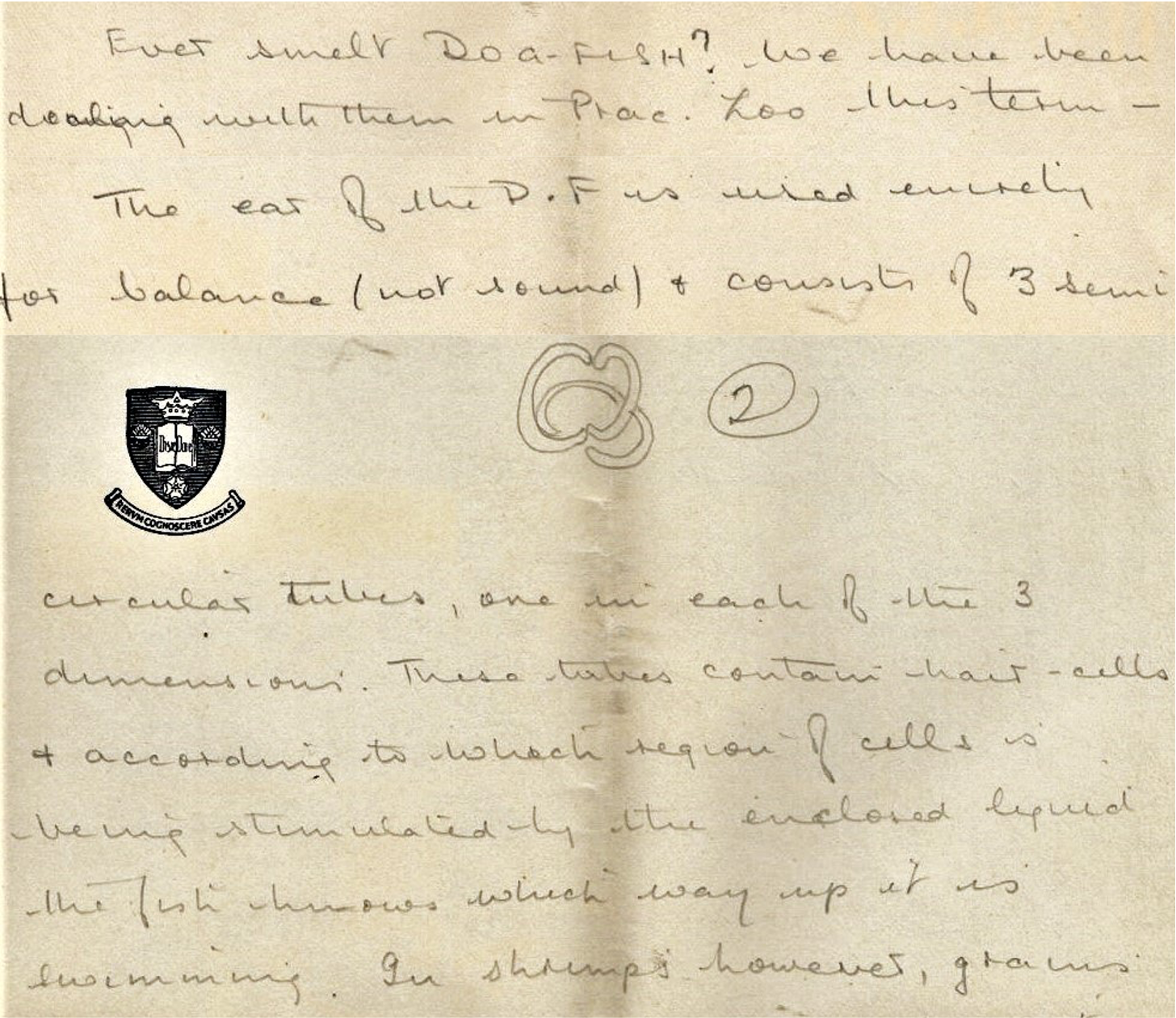 John joined the Rifle Club as well as the Senior Training Unit (known as the STC), which also gave automatic membership to the Local Defence Volunteers (LDV), who became the Home Guard and are forever labelled as Dad’s Army. His first report of the Rifle Club was on February 8th 1940:

Last Sat. the Rifle Club shot in the inter-Varsity small bore match. The only chance we have of winning it is if we are the sole competitors. Our score, 735 out of 800, is really rather shocking for the type of shooting we did. By getting 98 (out of 100) I kept up my reputation.

The next letter is dated 21st of February 1940 and it contains exam news:

Pre. Reg (Phys & Chem) comes off on March 19th et seq.. It ought to present no difficulties but my chem never has been strong, partly because I had never been taught it from first principles.

The increasing rate of conscription makes it doubtful that I can finish my medical course. 2 terms of Anat. & Physio. are needed for exemption ie. next March for me. I become 19 on Oct 25th. If so, what do you advise, Navy or RAF? More chance of a commission in the RAF? Probably a Sgt. Pilot is quite a good job. S. C. (School Certificate) essential.

By the next interesting letter dated 11th of May 1940, leaving the Phoney War and entering the Battle of France at this point, John reports about the numerous upcoming practicals and examinations in the month of June. He also gives Alan further information about a University debate which was reported in the local newspaper: 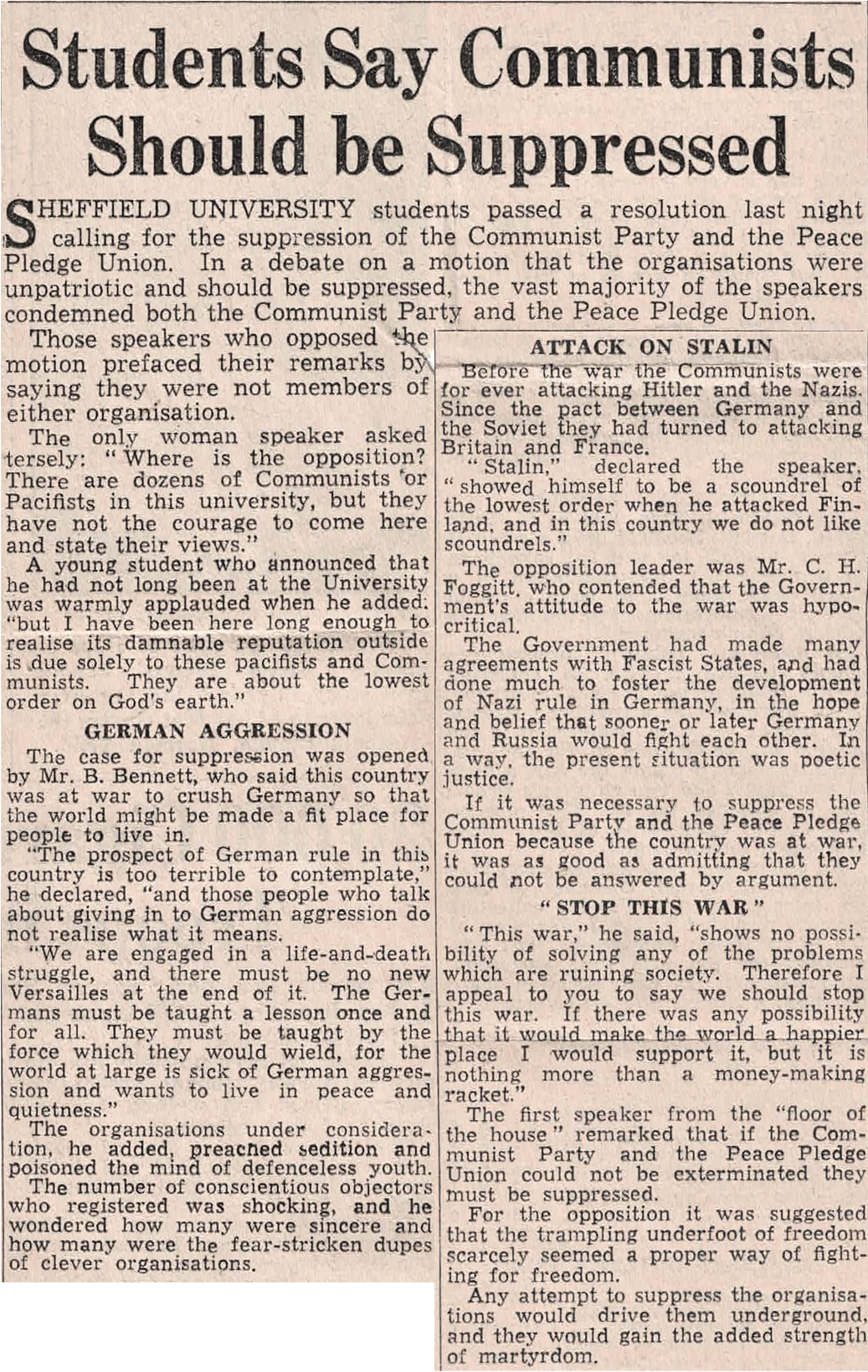 A section (used in a non-technical sense) of the S.T.C. turned up and did a bit of heckling. Afterwards they threw the local president of the P.P.U. (Peace Pledge Union) into the fountain in the middle of the western Bank quad. They also threw a couple of tomatoes at one of the leaders.

Clearly patriotic minds were being concentrated by the way the French and British were being driven back to the Channel. Apprehension about bombing was also becoming real. John and his Mother now had bunk beds in the cellar and a local carpenter strengthened the ceiling and shuttered the coal so that the coal-hole could be used as an emergency exit!

Mother has been out of the emergency exit twice so far and does so with ease. There is now a hose pipe on the bathroom tap so water can reach into the loft if the roof catches alight.

On the 26th of May 1940, John writes that he is wary of joining the LDV Parashots. This was a scheme to shoot down paratroopers in the air;

but what happens if you don’t? I’d rather be one man armed with a sub-machine gun and a bomb than one of 6 armed with rifles and an arm band with LDV inscribed.

They had no uniforms at this point.

The next excerpt of note was exams which have to be taken, war or no war.

On the 23rd of August 1950, John reports of the recent LDV camp he had been to at Wentworth:

was quite interesting. It contained the usual Cert. A stuff and also a fair amount of “Fieldcraft” as well as Bren and A.T. gun instruction. About 44 Sheffield LDV went there, some of the officers as hopeless as can be imagined. No idea of command. They were mainly ex. service but probably clerks and stretcher bearers in RAMC for all the good they were.

By Mid September the LDV had become the Home Guard and it had uniforms.

And not before time. The first bombs had dropped on Sheffield: 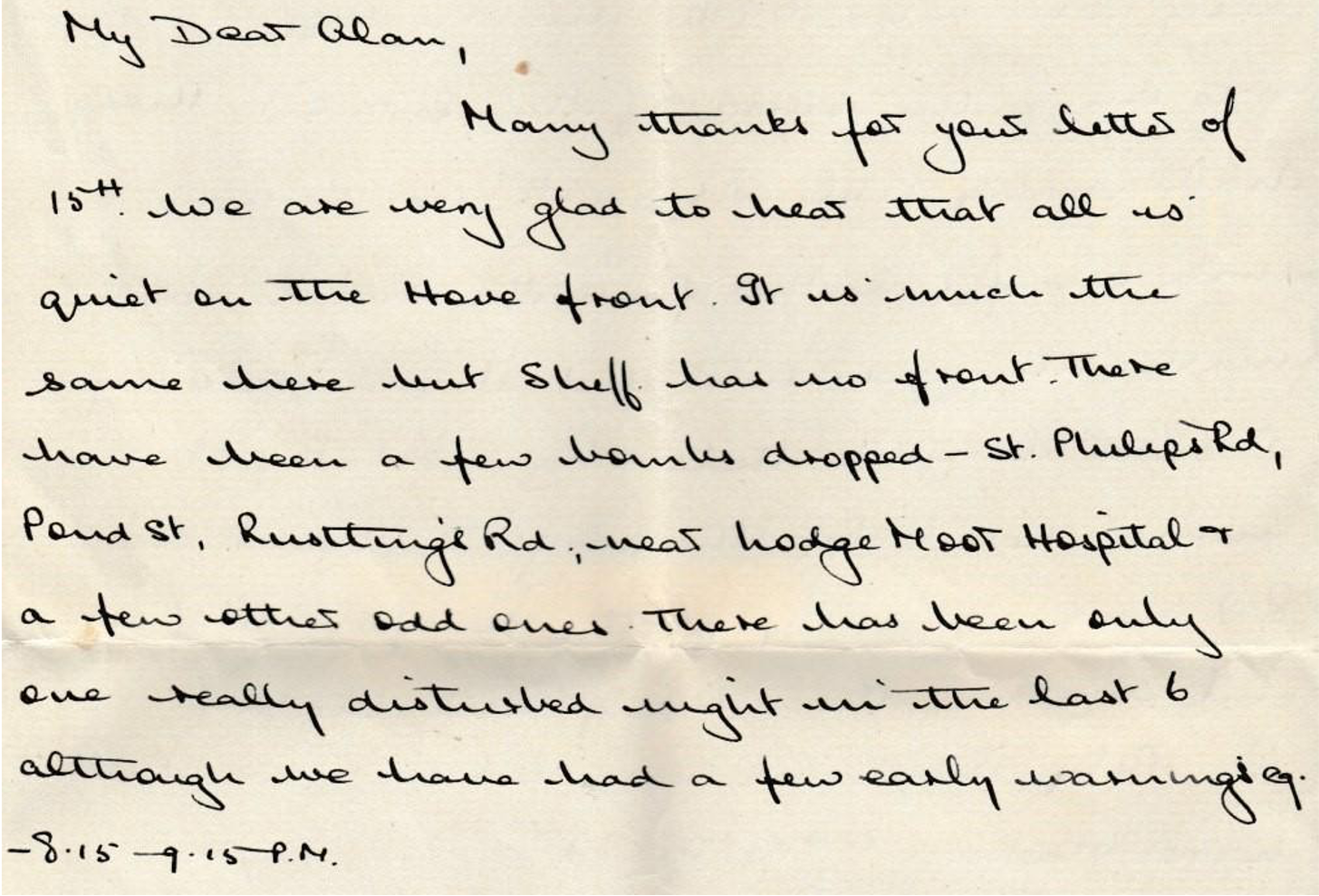 Thoughts turned at last to the new second-year studies, which required John to buy a microscope:

Alan wrote back, advising John to buy the £20 microscope, which he did and he was very happy with it.

After this, we have a long date gap in our collection of John’s letters to Alan, due to an extraordinary occurrence. Alan had gained a commission as a naval officer and he was posted to a new cruiser HMS Trinidad, as RADAR officer. He was on arctic convoys, escorting ships with war cargoes to Russia, which was hard-pressed to repel a surprise German invasion.

On convoy PQ13, they were attacked by 3 German warships. Alan’s new long-range RADAR was instrumental in locating them, with two being subsequently damaged. However, by launching a torpedo, the Trinidad inflicted great damage on itself. The water was so cold that the torpedo steering jammed and it travelled in a circle, hitting the Trinidad and nearly sinking it, killing 32 men. It limped into Murmansk and was partially repaired. However, on the return voyage, the Trinidad was attacked again by aircraft and had to be abandoned and sunk on 15th of May 1942. Alan survived but with the cruiser most likely went 19 months of John’s letters!

I heard numerous stories from my parents of their college days, including accounts of home birth visits in the blackout of the Sheffield blitz. John went to see Arthur Askey, the famous comedian, at the Empire Theatre early in the war. There were so few people there that Arthur said “Oh, if I’d known you were all coming I’d have set up a table on the stage and we could have played cards!” I saw first-hand the way the poor old City had been battered, from the top deck of the trams that seemed to run everywhere.

In the years 1942 to 1945, John was thrown in at the deep end with anaesthetics, delivered babies, met Pam at Medical School, they both qualified. They married at the end of the war and had 40 years of happy married life.

John’s career was crowned when he became President of the Royal College of Radiologists, 1980 to 1983 and was appointed CBE. Pam had many happy years working for Salisbury Infirmary and as Assistant Medical Officer for Richmond Upon Thames. Their Sheffield story does not end here as there are many more letters to be discussed in part 2.

About the Author: James Laws was born in 1948. He is a retired Theatre Lighting Designer and he teaches History of Lighting. He lives in Suffolk with his wife of 50 years, Pat. 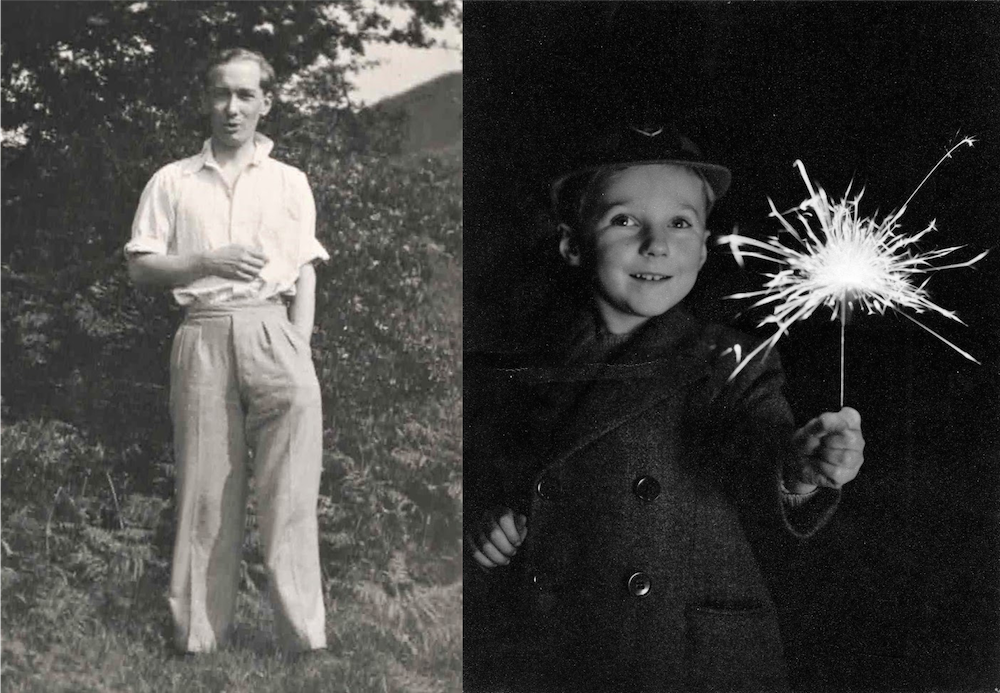 On the left is a picture of John from 1944; also circled in the cover photo. He took the photograph on the right of his son, James, when they lived in Sheffield in 1953.