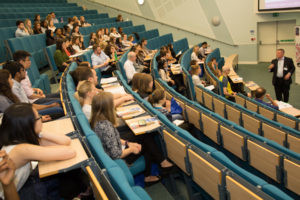 The Brain Heading Towards The Future

Visual, auditory, kinaesthetic: which way do you learn best? It may not matter anymore. Forget all you think you know about the process of learning… or don’t. Elon Musk’s latest venture is set to change the very concept of knowledge, identity and how we interact with each other.

Making his billions through the founding of PayPal, you may have heard of Elon from his electric car and solar power company Tesla, his re-usable rocket company Space-X, the zero air-resistance bullet trains of the Hyperloop or even the high-speed transport tunnels he is digging hundreds of feet below Los Angeles (by the so-called ‘Boring company’). The man is polymath and visionary, reputedly spending 80% of his work time on actual engineering and design; he seems to have humanity's best interests at heart.

When he’s not making our species interplanetary or combatting the world’s dependence on fossil fuels, Elon also has a thing or two to say about Artificial Intelligence (AI). Infamously telling Mark Zuckerberg that he doesn’t know what he’s talking about regarding the matter, Musk is backed by Steven Hawking and many other prominent scientists who are equally as worried about the threat of malicious AI. Imagine a self-improving computer programme able to increase in both knowledge and computing power exponentially; within minutes of its creation it would be infinitely more knowledgeable than any human and able to carry out tasks beyond our comprehension.

If this kind of power was under the control of one individual - or some shadowy organisation -, it could wreak havoc on global financial markets, having serious consequences for the global distribution of power.

Going one step further than this brings us to ‘the singularity’, where AI becomes self-aware and independent. This super-smart programme, once acquainted with all of human history, could decide that we humans are not worthy of life given, say, the destruction of the ozone layer, our many atrocities of war or our maltreatment of animals.

The solution, as Elon sees it, is to mitigate these threats by becoming super-smart ourselves. In his latest, most ambitious project yet, Neuralink, Musk plans to meld man and machine by creating an implantable device that seamlessly interfaces with our consciousness. It would directly provide knowledge to the forefront of our thought and allow communication between users via the cloud. Musk hopes that when true AI comes along it will become an indistinguishable part of us. In this way, if someone decides to use AI for some evil scheme, a group of other people equally enhanced by their own AIs could combat the threat. This decentralised and equitable approach to the introduction of AI will be key to our own safety.

While this may start to sound very sci-fi and a little far-fetched, Brain-Machine Interfaces (BMI) have been around for a while and are becoming more common every day. Cochlear and retinal implants, while reasonably crude at the moment, directly stimulate their respective nerves and act as input devices straight to our consciousness. Paraplegics can have a 100-pin multi-electrode array implanted into their motor cortex that allows them, after some training, to control a robotic arm. Interestingly, problems arise here as there is no feedback from the system, and, without this proprioception the arm won’t feel like their own. Until BMI technology develops enough that it can stimulate the right neurons to synthetically recreate touch, we can use the brain’s neuroplasticity as a shortcut. By stimulating another area of the brain while simultaneously using the bionic arm, the brain can learn and slowly adapt to treat the new signal as the sense of touch. It would seem odd at first for the patient but this ‘sensory substitution’ is a promising way to allow the brain to become a collaborator in BMI efforts. Deep brain stimulation is another common BMI, however, this only interacts with the unconscious brain helping to reduce tremors, in Parkinson’s disease, or the severity of epileptic seizures.

So are we all going to be cyborgs? The answer is that we already are. If you’re lucky enough to not need one of the implantable devices already mentioned, you might need a pacemaker or defibrillator in the future. Even if you don’t, you already have a smartphone. That small device in your pocket contains the sum total of all human knowledge - and ignorance - and it allows you to complete tasks that would be impossible without it. Want to speak face-to-face with your friend in Australia? No problem. Want to read Homer’s Odyssey? Sure. All a BMI promises to do is take away the pointless and clunky steps of getting the machine out of your pocket, typing, sifting through irrelevant information, to finally reach your goal. Knowledge will be seamlessly available to your consciousness. All you hold dear about reading, writing, in fact, language altogether, is just another invention we humans came up with to transmit information from our brain to someone else’s brain. BMIs will do away with this altogether leaving language as something we look back on with nostalgia. There will be no need to articulate, no difficulty with comprehension as ideas are directly transferred. As Elon puts it: ‘it will mean a type of conceptual interaction on a level that’s difficult to comprehend’.

We’re getting ahead of ourselves… how would this thing even work? We already have a number of ways of reading the output of the brain: functional magnetic resonance imaging (fMRI) tracks blood flow to show the activity in different parts of the brain; however, its resolution is far too low for use in BMIs. Each pixel, or voxel as they are known, covers about a cubic millimetre - leaving tens of thousands of neurons within this mm3. EEGs have a similar problem of low resolution, as their reading averages millions of neurons. More invasive procedures such as Local Field Potentials and the Multi-Electrode Arrays, as used in the bionic arm example, give much higher resolution but cannot cover the whole brain. These are physically implanted microelectrodes made of silicon which pick up average potentials from a number of neurons.

The best method we have so far is called Single Unit Recording. Equally invasive, it uses a very high resistance, super sharp needle electrode that can detect the firing of single neurons. A similar method uses a tiny glass pipette to form a ‘patch clamp’ where some of the neuron’s cell membrane is suction cupped allowing direct contact. Using this method, single neurons can be stimulated as well as read.

The problem that arises is one of scale. If you were to unfold the cortex of a human brain it would cover roughly a 480x480mm square, 2mm thick. With there being around 40,000 neurons per cubic mm of brain, that’s a lot of neurons. With today’s technology, it’s only possible to record around 500 neurons at once. The problem that results is one of bandwidth: we simply can’t yet collect all the information we need from the brain. If Moore’s law is applicable to BMI’s the hope is that our maximum connections will double every 18 months, just as the number of transistors we can fit onto a computer chip has since 1965. Let’s hope for some paradigm shifts in technology in the meantime to speed that up.

The Human Connectome Project is currently undertaking the mammoth task of creating a complete detailed map of the entire human brain. It’s taking 30-nanometre-thick slices to help visualise the connections throughout the brain and has shown over different 9 cell types, creating some lovely images in the process. However even with such a detailed map, the problem of bandwidth persists. We need to connect to every one of the brain’s neurons for a seamless whole brain-machine interface.

Elon has assembled a pretty big-dog team for his Neuralink task; they range from IBM microchip designers to biocompatibility experts, neurosurgeons to microfabric engineers. DJ Seo, one team member, is a pioneer in microsensors. His invention ‘Neural Dust’ could prove useful for Musk. The tiny 100 micrometre silicon chips that he creates can be dispersed through the vascular system and allow diffuse ultrasound recording of the brain. Other future possibilities for recording the brain include a Neural Mesh that unfolds like a net sub-durally, Transcranial Magnetic Stimulation inducing electrical pulses with a magnet outside the brain, or the use of Optogenetics, where genes are implanted into the DNA of a brain cell allowing it to be stimulated by light.

There are a few more hurdles before rollout can begin. Biocompatibility is one, and it is assumed that the technology must become both compact and wireless before people will want these things in their heads – unless we also figure out a way to do this non-invasively. Yet, if our consciousness is accessible wirelessly, we could have a Ghost in The Shell (1995 not 2017) style situation where people’s very soul can be hacked, memories changed and motivations altered. Security is therefore another must. The hope is that one-day these operations will become something comparable to a laser eye surgery. For now, Elon is aiming to bring out a product for those suffering from severe brain injuries within 4 years.

Of course, you’re welcome to your own opinion on whether this is  likely to happen in your lifetime, or even at all. However, it certainly seems possible that BMIs will become a reality, which brings on more existential ramifications of what a truly whole brain-machine interface will mean. As mentioned previously, you would be able to have the entire Internet on tap. You would be able to recall anything at will and not know whether the information has come from your memory banks or through the cloud. It will herald an end for many diseases such as dementia and cause the boundary between man and machine to disintegrate. An other aspect we have already talked about is direct brain-to-brain communication where ideas are transferred without need for articulation. Feelings will also be transferable, meaning an evolution in emotional intelligence and empathy. In fact, you will be able to allow anyone to see what you’re seeing or hear what you’re hearing as sensory communication becomes possible. This all raises issues of privacy of course, but more importantly what happens to individuality under such circumstances? Isaac Asimov’s sci-fi short The Last Question describes a similar scenario: ‘each physical body losing its mental identity in a manner that was somehow not a loss but a gain.’

Image: The wiring diagram of a human brain, measured in a healthy individual. The movement of water molecules is measured by diffuse tensor magnetic resonance imaging, revealing the connections.

Source: Courtesy of the Laboratory of Neuro Imaging and Martinos Center for Biomedical Imaging, Consortium of the Human Connectome Project.